Feedback
Previous 11 Common Types Of Verbs Used In The English Language Next What Is Active Voice And How Do You Use It?

The party was held by a generous celebrity. Delicious food was eaten. Songs were sung. Joy and fun was had by all!

Wow! Sounds like a fun party. But what’s going on in those sentences? Don’t they look … backwards?

All of these sentences are written in what is known as the passive voice. The passive voice flips the script and begins a sentence by saying who or what had something done to it. While this sounds exciting, the passive voice is usually left off of the guest list when it comes time to hold a grammar party. This might sound unfair, but there’s often a good reason why the passive voice gets left out in the cold. Before we get into that, though, let’s look a little closer at what the passive voice actually is and how we use it in our speech and writing.

What is the passive voice?

A sentence that doesn’t use the passive voice instead uses what is called the active voice. A verb is in the active voice when the subject is the one performing an action, as in the sentence Eduardo cooked the dinner.

In order to use the passive voice, our sentence will need to follow a basic structure. This is:

For example, the sentence My wallet was stolen is a grammatically correct sentence that uses the passive voice. When using the passive voice, the verb be is conjugated and put into the proper verb tense to show when in time an action happens. For example:

Often, the passive voice also uses a prepositional phrase beginning with the word by to state who or what is performing an action on the subject. The sentence My wallet was stolen by a pickpocket is an example of this.

Want to know what else a prepositional phrase can do? Learn more about them here.

The most important thing to know about passive verbs is that they must be transitive verbs. A transitive verb is “a verb accompanied by a direct object and from which a passive can be formed.” The following list has examples of past participles of a variety of verbs ready to be used in the passive voice.

The following sentences all use the passive voice. In all of these sentences, you will notice that the subject is having something done to it rather than doing something itself.

When do you use the passive voice?

When the performer of the action is unknown

You are likely to see the passive voice used in reports of police investigations or historical discoveries where an unknown person or group did something.

When it doesn’t matter who the actor is

The passive voice may be used when it really isn’t important who or what does something.

Sometimes, the passive voice is used to speak generally about a truth.

When emphasizing the person or thing acted on

We can use the passive voice to shift the focus to the receiver of an action rather than the performer. Often, we do this if the subject is the focus of attention or is considered more important in a given context.

When avoiding assigning blame to someone

Because the performer of an action can be omitted when using the passive voice, we may use it to hide their identity in order to avoid assigning blame. (This might mean the speaker is the one who did the action!)

When you want to use the same subject repeatedly

The passive voice can help you make natural sounding sentences when you want to say that a subject both did something and had something done to it.

Scientists and researchers often use the passive voice because it is either obvious or unimportant who is doing a task or conducting an experiment. However, even scientists may avoid the passive voice depending on the rules of the style guide they prefer to use in their writing.

Learn more about the many types of verbs.

When should you avoid passive voice?

Arguably the most common reason you would want to avoid using the passive voice is because it can cause long, confusing sentences or sentences that just sound awkward. Here are a view examples of this:

While all of the above sentences are grammatically correct, you probably didn’t enjoy reading them very much. By using the passive voice, all of these sentences are much more confusing than they need to be.

Passive voice should be avoided if it makes a sentence too vague. For example,

In all three of these examples, the passive voice makes it impossible to tell who did what. All three examples would be much more clear if the active voice would have been used instead.

One of the main reasons passive voice is avoided in academia is because it allows a person to make claims or statements without explicitly naming a source of information. For example:

In most cases, the best way to fix a sentence that uses the passive voice is to turn it into one that uses the active voice. When we do this, it is important that we don’t alter the meaning of the original sentence. Both the passive and active versions of the sentence should mean the same thing. In general, we turn a passive voice sentence active by turning the subject into a direct object and making the performer of the action the subject of the new sentence. To demonstrate, let’s take some of our problematic sentences from earlier and fix them up.

The subject television (passive sentence) is now the direct object of the active sentence. Here are two more examples:

As you can see, the second sentence doesn’t make any sense. You can’t “hibernate” something, so you can’t actually use the verb hibernate in a passive voice sentence that makes grammatical sense. 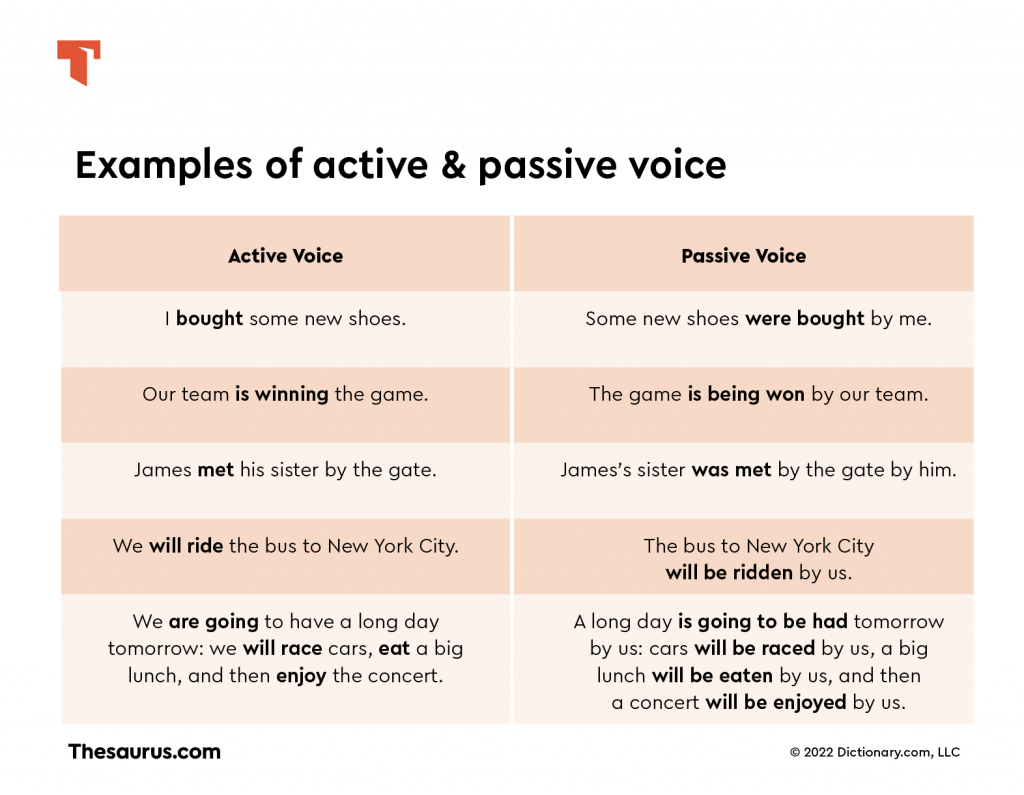 Confused about passive voice and its proper use? Let Thesaurus.com Grammar Coach™ guide you! This writing platform uses machine learning technology uniquely designed to catch grammar as well as spelling errors. Grammar Coach™ will advise you on the proper use of passive and active voice. (Bye-bye pesky passives!) Plus, Grammar Coach™ Synonym Swap will find the best nouns, adjectives, and more to help say what you really mean, guiding you toward clearer, stronger, writing.

How do stative verbs work? Take a look!

Previous 11 Common Types Of Verbs Used In The English Language Next What Is Active Voice And How Do You Use It?
RELATED POSTS

Home / Grammar / What Is Passive Voice And How Do You Use It?