Sometimes, looks can be deceiving. Jumping to conclusions about things can land you in trouble. This is certainly the case when it comes to words we use in English. Take gerunds for example: they look a lot like verbs but they don’t act like them at all. In fact, they prefer to act like nouns.

What gives? Gerunds come from verbs, after all, so why do they refuse to act like them? Are they going through a rebellious phase? Do nouns throw better parties? It isn’t our place to judge the habits of parts of speech, but it is worth taking a closer look at gerunds to figure out the best ways to use them in sentences. (You don’t want their identity crisis to make you look like a fool who uses improper grammar!)

What is a gerund?

A gerund is a form of a verb that ends in -ing that is used as a noun. As you may know, a verb is a word that refers to actions or states of being, and a noun is a word that we use to refer to people, places, things, and ideas. A gerund is like a blend of verbs and nouns. It looks like a verb, but it acts like a noun. For example, the word swimming is an example of a gerund. We can use the word swimming in a sentence as a noun to refer to the act of moving around in water as in Swimming is fun. When used in sentences, gerunds are treated as third person singular nouns (like he, she, and it).

You can turn any verb you want (except a modal verb) into a gerund. Here is a list of gerunds formed from a variety of verbs:

Curious about types of verbs but don’t know where to start? How about this close look at action verbs?

Examples of gerunds in a sentence

Let’s take a look at some sentences that use gerunds:

How do gerunds function?

Just like nouns and noun phrases, gerunds and gerund phrases can be used in several different ways in sentences. In general, there are four different ways that we use gerunds: as subjects, subject complements, direct objects, and objects of prepositions. 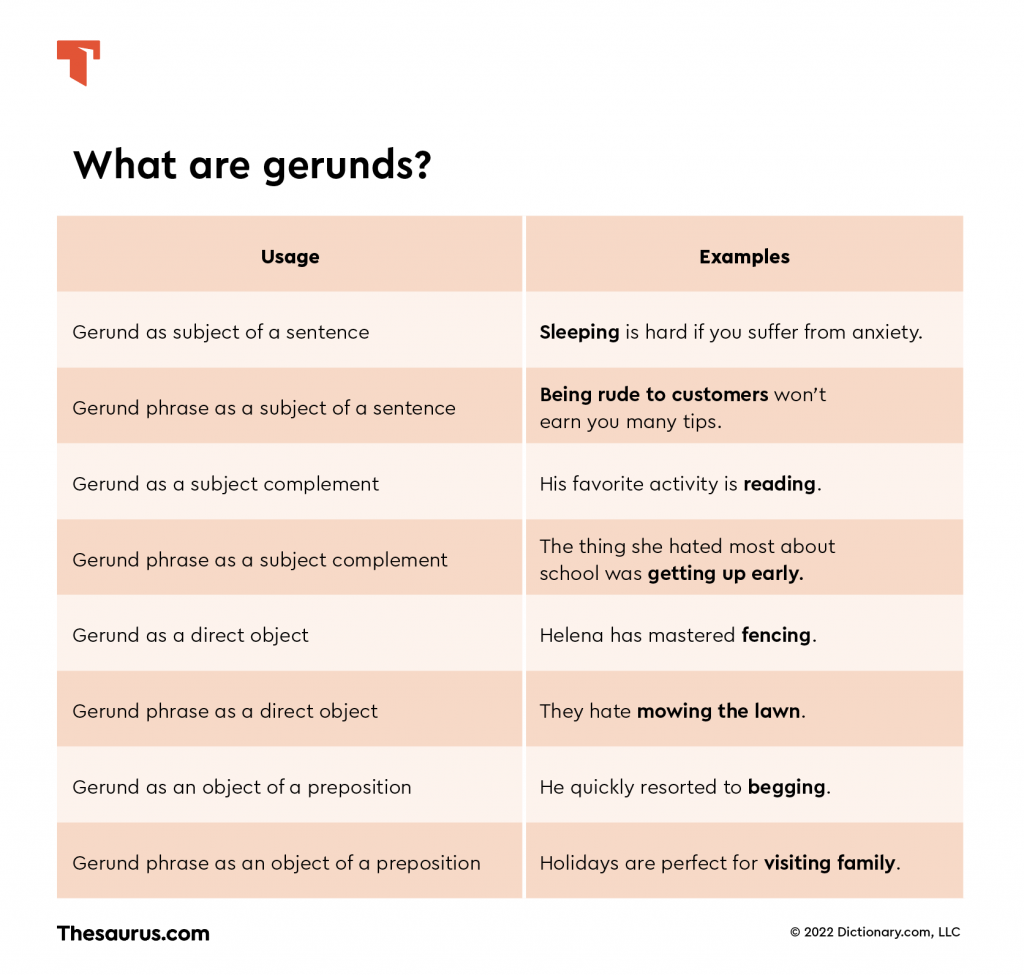 Brimming with information, this review of participles will answer any questions you have on the subject.

If you are still a little confused, remember that gerunds are used as nouns. This means that gerunds can only do the same jobs that nouns do: act as subjects, subject complements, and objects. Gerunds don’t act as modifiers and are not used as verbs.

Let’s look at a few more sentences. Read each sentence carefully and see if you can tell if the bolded word is a gerund or a participle.

We’ve got a gerund for you: perfecting! As in, perfecting your writing is perfectly possible with Thesaurus.com’s Grammar Coach™. This tool uses machine learning technology uniquely designed to catch grammar and spelling errors in your writing. Its Synonym Swap will find the best nouns, adjectives, and more to help say what you really mean, guiding you toward clearer, stronger, writing. Grammar Coach™ is here to help you with any assignment or project you have!

Are you ready to take the official gerunds quiz now? Take it here!

Another verb form that vexes people is the split infinitive. What exactly is it?

Home / Grammar / What Is A Gerund? Definition And Examples